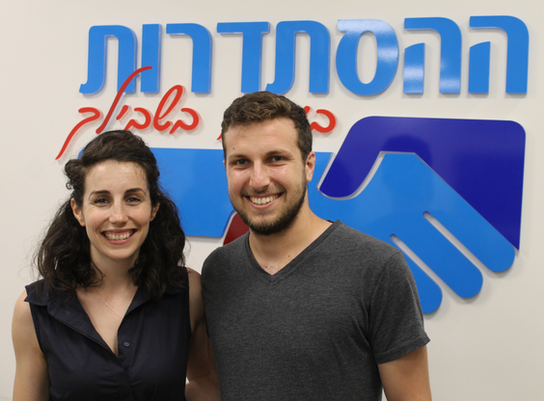 What was your motivation to get into the students program within Histadrut?
I joined the Histadrut, because I was an activist in the struggle to stop the outsourcing of contract workers in my university. I joined to harness the significant political and organizational resources of the Histadrut to a local workers rights struggle I was involved in. Furthermore, I was extremely interested in learning and teaching about our rights as workers.

How is the program going so far? What are your future plans?
I believe the program is a success. One of the programs branches led the successful struggle to stop the outsourcing of workers in Haifa University. I think that the program's main contribution is politicizing young Israelis around a social struggle. I am a political activist, and I plan to continue promoting my causes – Peace and Social Justice.

What does you work at the program look like?
My work combines two distinct rolls – education and activism. On the education level, I raise awareness about rights and unionized labor, I give lectures about reading and understanding paychecks and pensions, we organize events that raise awareness to the complexities and challenges we are facing as young workers with an uncertain future. On the activism level, I am part of a coalition that includes many organization on campus, trying to recruit support for the struggle to end the unjust, exploitive employment of outsourced workers in the University.

What are your experiences in working with other volunteers in universities?
On one hand, Israelis are indifferent politically. We struggle with a lot of apathy to our cause, a lot of avoidance and lack of interest in large numbers. On the other hand, there are individuals who are political brave, highly motivated leaders, who understand their responsibility and power to shape the reality around them. Throughout human history, students were and are the driving force of political and social change.

What was your best experience working with Histadrut?
Last year, we organized a simultaneously nation-wide protest in several campuses against the employment of contract workers in the campuses. A week later, the Histadrut brought contract workers from the universities, professors and students to protest at the gates of the ministry of education, in a mass demonstration of solidarity.

How is Histadrut supporting you in your work?
The Histadrut is offering its political and financial support, as well as its knowledge and experience to assist the program in achieving its objectives. Furthermore, the Histadrut offers legal and professional assistance to students struggling against exploitive employers in litigation and legal action.

Why does it make sense to you, to bring social struggles and union work together?
I think that our political and class identity as workers is a significant part of our lives. Most of our life we work, and a significant part of our day is dedicated to our career or occupation. Our wellbeing and welfare in our work is necessary to ensure our wellbeing and welfare in life. In addition, understanding that the current situation in unsatisfactory, and that we, as individuals joining forces, have the power to change the current situation – drives us into activism, into politics, into social struggles.